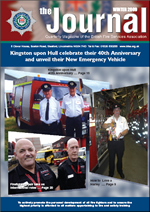 A fierce political battle has broken out surrounding the intentions of the fire authority in Berkshire to downgrade Windsor Fire Station to ‘daytime response only’.

The campaign is being co-ordinated by Michael Rowley LGCI, LL.B (Hons), PgDip.Law,LL.M. Michael is a serving firefighter at Windsor with nearly 24 years experience and he is a local official of the Fire Brigades Union.

The proposal is to close the Windsor Fire Station at night and provide cover for the station ground from Slough. The fire authority claims that this will add only three calls per week to the burden of operational calls placed upon Slough Fire Station. However, the campaigners dispute these figures and have produced a detailed report to support their case.

The Royal Borough of Windsor Council has applied for judicial review of the fire authority’s proposal claiming lack of public consultation. The case is scheduled to be heard in the High Court on 29th January 2009.

The campaigners have marshalled an impressive list of celebrities that are lending their support to the campaign to keep Windsor Fire Station operational 24 hours a day. These include Sir Michael Parkinson, Anna Friel, Piers Morgan, Adrian Moorhouse MBE, Warwick Davis, Sir Alan Sugar, Rudi Giuliani, Timmy Mallett, Windsor Rugby Club, Rolf Harris, Tom Adams, to name but a few. Toview the full list of celebrities that are lending support to the campaign go to www.windsorfirestation.co.uk

The campaigners have also issued a DVD and posted it on YouTube. It is a hard-hitting piece of propaganda with musical backing to the tune of ‘Silent Night’.

The local Member of Parliament, Adam Afriyie MP, has added his weight to the campaign to maintain full cover from Windsor Fire Station. Mr Afriyie has gone on record as pointing out that if the fire authority gets its way, the fire cover in Windsor will drop to the same standard as that of Newquay, a town that suffered a dreadful hotel fire at night recently with fatalities. Mr Afriyie’s statement includes the words, “Whilst the fire services anticipate that the new cover will keep response times within the national best practice target, this is little comfort to those whose response times may well increase.”

BFSA JOURNAL will continue to monitor the progress and outcome of this dispute.